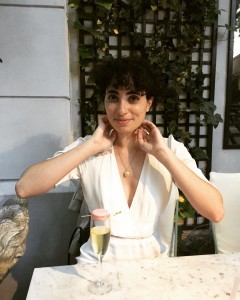 Koa Beck is the former editor-in-chief of Jezebel and co-host of “The #MeToo Memos” on WNYC’s The Takeaway. Previously, she was the executive editor of Vogue.com and the senior features editor at MarieClaire.com.

Koa was a guest editor for the 2019 special Pride section of The New York Times commemorating the 50th anniversary of the Stonewall riots, editing such prominent voices as Kate Bornstein, Gavin Grimm, Julia Serano, and Barbara Smith, among other activists.

For her reporting on gender, LGBTQ rights, culture, and race, she has spoken at Harvard Law School, Columbia Journalism School, The New York Times, and The Metropolitan Museum of Art, among other institutions. She has also been interviewed by the BBC for her insight into American feminism.

Her literary criticism and reporting have appeared in The Atlantic, Out, The Globe and Mail, TIME, The Guardian, Esquire, Vogue, Marie Claire, among others. Her short stories have been published in Slice, Kalyani Magazine, and Apogee Journal. She has been nominated for the Pushcart Prize and serves on the board of directors of Nat.Brut, an art and literary magazine, as well as on the advisory board of GALECA: The Society of LGBTQ Entertainment Critics.

In 2019, Koa was was awarded the Joan Shorenstein Fellowship at the Harvard Kennedy School, publishing an academic paper entitled “Self-Optimization in the Face of Patriarchy: How Mainstream Women’s Media Facilitates White Feminism.” Her book White Feminism: From the Suffragettes to Influencers and Who They Leave Behind  from Simon & Schuster was published in January 2021.

She lives in Los Angeles with her wife.